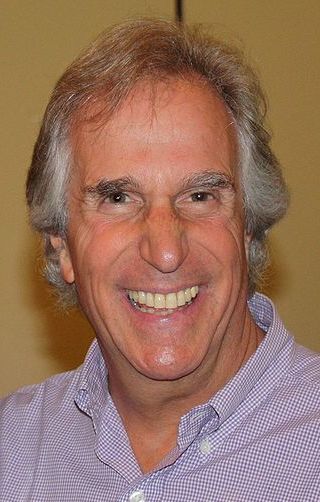 Henry Winkler was born in 1945 in Manhattan to Anna Maria and Harry Winkler.  His Jewish parents had left Germany in 1939 just prior to the start of World War II. Winkler was a bright child but had difficulties in school.  Despite making the effort in both math and reading, he couldn't meet his parents’ expectations. They grounded him for bad grades and insisted that he study at his desk in his room for weeks on end. His father refered to him as “dumb dog” straining his relationship with both his parents.

“When I was growing up in New York City, no one knew what dyslexia was. I was called stupid and lazy, and I was told that I was not living up to my potential.  It was, without a doubt, painful.  I spent most of my time covering up the fact that reading, writing, spelling, math, science—actually, every subject but lunch—was really, really difficult for me.  If I went to the store and paid the bill with paper money and I was given coins back for change, I had no idea how to count up the change in my head. I just trusted that everyone was being honest.”

Despite the challenges, Winkler eventually graduated and went on to earn a Master of Fine Arts degree from the Yale School of Drama in 1970.

His big break was landing the role of Arthur Fonzerelli, aka the Fonz, on the long running US TV sit-com Happy Days. This was not an easy task as he had a hard time reading his scripts.  “You learn to negotiate with your learning challenge.  I improvised. I never read anything the way that it was written in my entire life.  I could instantly memorize some of it and then what I didn’t know, I made up and threw caution to the wind and did it with conviction and sometimes I made them laugh and sometimes I got hired.”

Although he got the part and excelled – the Fonzerelli character was planned as just a small part in the series - but Winkler’s charisma and energy soon made him a co-star with Ron Howard, though his reading difficulties still dogged him. Even with two days to read and review his lines, he would improvise once he got to the studio, unable to remember the dialogue he had worked so hard to memorize.

It was only when Winkler was 31 and his step-son’s learning difficulties were diagnosed as dyslexia that he finally realized that he too had the learning disability.

In 2003 Henry Winkler’s agent suggested that he write children’s books and although he has stated that he, “never for one second thought about writing books,” he went on to meet with Lin Oliver with whom he has collaborated with to write the critically acclaimed Hank Zipzer series of children's books about a bright 4th grade boy with learning disabilities.

Winkler and Oliver modeled Hank after the young Winkler.  “I grew up on the West side of New York City in the same building Hank lives in.  The neighborhood, the stores, the park, the school, and even Ms. Adolf – the worst teacher in the universe - are all taken from my life.”  To date Winkler has published 17 books about Hank Zipzer, the "world's greatest underachiever".

Today he often gets mail from young readers asking, “How do you know me so well,” and parents exclaiming that their children, who would never have attempted to read a book before, love reading about Hank Zipzer and continue to read though the series.

“You don’t have any idea how powerful you are and what you can achieve.  You literally cannot give in to your fear.  You literally have got to walk over it, step on it’s face and keep moving toward where you want to go and eventually, if I can get there, there’s no reason you can’t get there.”

“I guess the key is, no matter how many times you fall over, you dust yourself off and you keep moving.”

Return to the top of Henry Winkler