Are there different types of dyslexia? If there are, they might require different kinds of interventions. This suggests it is important we identify any varieties that might exist. As a first step, consider the Venn diagram below that breaks out reading disabilities by deficit. About 20% of people have a reading disability and they fall somewhere in the three blue circles depending on their deficits.

The different combinations of deficits confirms that struggling readers will likely require some personalized interventions. But differences within the phonological deficit circle alone, which we explore below, add further to the complexity. 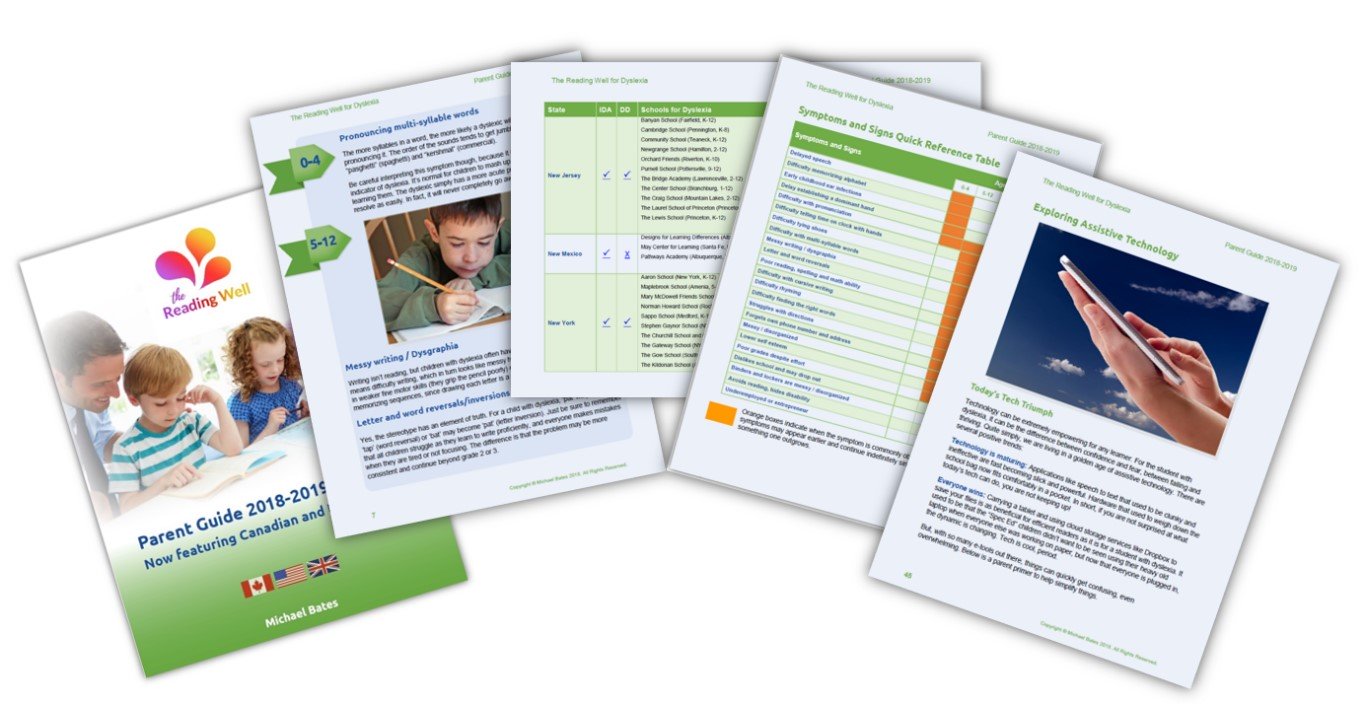 Our 2018-19 Parent Guide on Dyslexia is now Available! 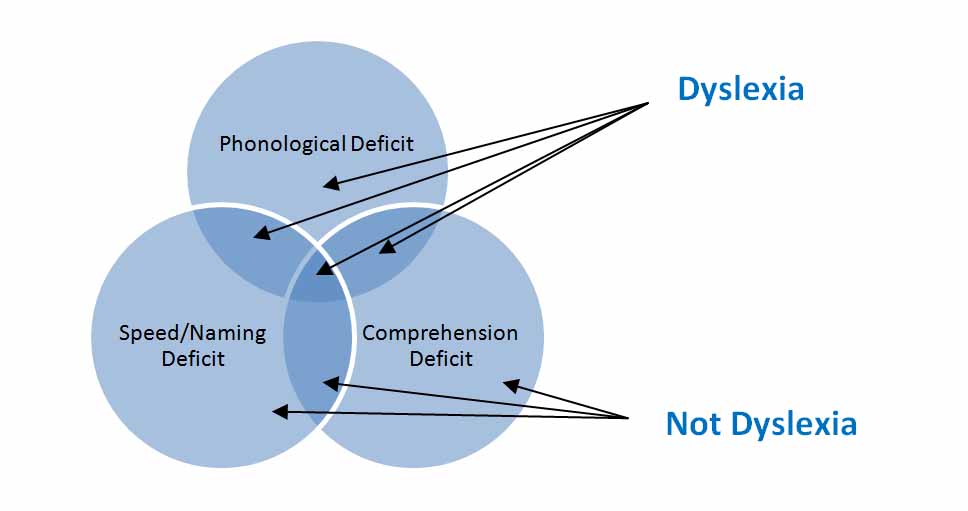 There are three kinds of reading deficits.

All varieties of dyslexia involve a significant phonological deficit, regardless of whether there is a comprehension or speed deficit. In practice, most people with dyslexia have at least two deficits.

See our What is Dyslexia page for more detail.

But people with severe reading disabilities aren't randomly distributed across the three deficit circles. A whopping 80% have a phonological deficit and fall in the top bubble. These are the ones we would call dyslexic. They typically have difficulty discriminating  and manipulating phonemes, lacking the ability to easily decode or assemble words based on their constituent sounds.

About 20% of those with reading disabilities have speed and/or comprehension problems but can sound out words without difficulty - they technically don't have dyslexia but will need reading help, just a different kind of help. See the Dyslexia Treatment page for more details on the specific kinds of help.

Can we divide the group of people who are in the top bubble further into more specific dyslexia types? Are there 101 flavours? The short answer is yes, there are different types and these types do have some implications for treatment.Unfortunately, academics and researchers identify and define more types of dyslexia than parents and teachers can keep track of. Further, many websites define different types incorrectly or discuss types which are not widely recognized at all.

Below is a taxonomy of only the most commonly recognized and discussed types of dyslexia. 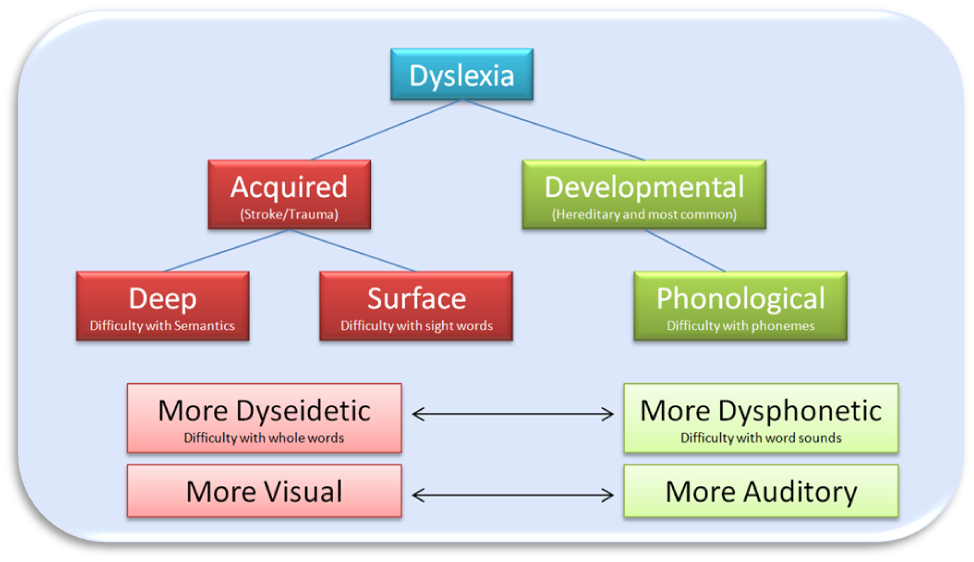 By Time of
Onset

Click on each type above for more details. A short description is provided below.

Auditory dyslexia involves difficulty processing sounds of letters or groups of letters. Multiple sounds may be fused as a singular sound. For example the word 'back' will be heard as a single sound rather than something made up of the sounds /b/ - /aa/ -/ck/. Single syllable words are especially prone to this problem.

Visual dyslexia is defined as reading difficulty resulting from vision related problems. Though the term is a misnomer, visual problems can definitely lead to reading and learning problems.

A 2010 study from Tel Aviv University in Israel found a type of dyslexia they call attentional dyslexia in which children identify letters correctly, but the letters jump between words on the page. 'kind wing' would be read as 'wind king.' The substitutions are not caused by an inability to identify letters or convert them to sounds, but instead result from the migration of letters between words—the first letter of one word switches place with the first letter of another word.

According to Nancy Mather and Barbara Wendling in their excellent 2012 book Essentials of Dyslexia Assessment and Intervention, surface dyslexia is:

"A type of dyslexia characterized by difficulty with whole word recognition and spelling, especially when the words have irregular spelling-sound correspondences."

Deep dyslexia is an acquired form of dyslexia, meaning it does not typically result from genetic, hereditary (developmental) causes. It represents a loss of existing capacity to read, often because of head trauma or stroke that affects the left side of the brain. It is distinguished by two things:semantic errors and difficulty reading non-words.

By Time of Onset:

Developmental dyslexia is not so much a type of dyslexia, it is dyslexia.

So why do people use the term instead of just saying dyslexia? The simple answer is they are trying to be more specific, distinguishing 'regular' dyslexia from the other types of dyslexia. In particular, distinguishing it from acquired forms of dyslexia that result from stroke or head trauma for example, which often present very differently. For more on developmental dyslexia, visit the International Dyslexia Association website.

This type results from trauma or injury to that part of the brain that controls reading and writing. Late in life this can be the result of a tumor or stroke.

Directional dyslexia is distinguished by left-right confusion and a tendency to become disoriented or lost. The term is also occasionally used to mean confusion with letters such as p and b or d and b, where there is confusion over the 'direction' of the letter. Generally, problems with directions are a symptom of dyslexia more than a sub-type. Not all people with dyslexia have this problem.

Math dyslexia or dyscalculia is not, in fact, a type of dyslexia, but we included it here because the term is frequently used. According to the U.S. National Center for Learning Disabilities, math dyslexia, or dyscalculia, refers to a wide range of lifelong learning disabilities involving math, varies from person to person and affects people differently at different stages of life.

As with reading, when basic math skills are not mastered early, more advanced math becomes extremely difficult. Approximately half of people with dyslexia also have dyscalculia, though far less research has been conducted regarding testing, assessment and remediation.

Back to the top of Types of Dyslexia

Image Note: (types of reading disabilities) Inspired by a similar diagram in Moats, L, & Tolman, C (2009) in Language Essentials for Teachers of Reading and Spelling (LETRS): The Challenge of Learning to Read (Module 1). Boston: Sopris West. Note that the original diagram did not include dyslexia within the framework, and the authors may or may not agree with its orientation here.