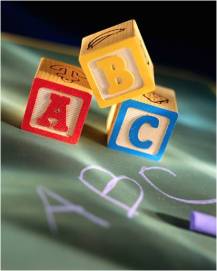 This type of dyslexia is synonymous with dyslexia itself. See our What is Dyslexia page for more information.

The cause is believed to stem from a difference in brain areas associated with processing the sounds of language. Phonologic dyslexics are tapping brain regions which are less efficient at processing phonemes and recognizing words by sight in comparison to efficient readers. Over the past two decades breakthroughs in brain scanning and neuroscience have provided ongoing support for this hypothesis regarding the cause of dyslexia.

Unfortunately, the phonological problem alone does not account for the many symptoms of dyslexia unrelated to phonetic decoding difficulties, including short-term memory problems, difficulty with balance and fine motor skill, common in dyslexic children - symptoms that contribute to dysgraphia and dyspraxia. In short, the root cause of dyslexia remains unknown.

The best documented methods for teaching a student with phonological dyslexia are largely based on principles of the Orton-Gillingham approach to reading that was developed in the 1930's by Samuel Torrey Orton and Anna Gillingham.

1) Personalized: Teaching begins with recognizing the differing needs of learners.

2) Multisensory: Involve regular interaction between the teacher and the student and the simultaneous use of multiple senses including auditory, visual, and kinesthetic (touch).  For example, a dyslexic learner is taught to see the letter A, say its name and sound and write it in the air – all at the same time. The use of multisensory input is thought to enhance memory storage and retrieval.

3) Structured, Systematic, Sequential, and Cumulative: Language elements and rules are introduced in a linguistically logical, understandable order. Students go back to the very beginning of their language learning, to lay a proper foundation.

Beginning by reading and writing sounds in isolation (phonemes), then blending sounds into syllables and words. Elements of language—consonants, vowels, digraph blends, and diphthongs are introduced in an orderly fashion. Only later, learners proceed to advanced structural elements such as syllable types, roots, preffixes and suffixes.

4) Cognitive: Students study the many generalizations and rules that govern the structure of language.

5) Flexible:  Instructors ensure the learner is not simply recognising a pattern and applying it without understanding. When confusion of a previously taught rule is discovered, it is re-taught from the beginning.

6) Personal and Direct: Building a close teacher-student relationship with continuous feedback and positive reinforcement leading to success and self confidence.

For more detailed information see our page on programs that work.

When people use the term dyslexia they are usually referring to the classic phonological kind, but to impress at the cocktail party you can add the adjective to be more specific. The term phonologic serves as a helpful reminder of the problem that most struggling readers have: difficulty manipulating the basic sounds of language, resulting in difficulty sounding out words.

Return to the top of Phonological Dyslexia