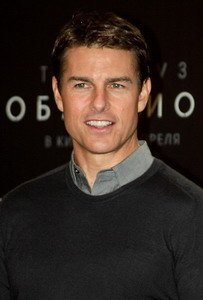 Tom Cruise was born in Syracuse New York, the son of a special education teacher. His family was relatively poor and he had to move between communities and schools several times. By grade 2 was struggling with his dyslexia in school:

“When I was about 7 years old, I had been labeled dyslexic. I'd try to concentrate on what I was reading, then I'd get to the end of the page and have very little memory of anything I'd read. I would go blank, feel anxious, nervous, bored, frustrated, dumb. I would get angry. My legs would actually hurt when I was studying. My head ached. All through school and well into my career, I felt like I had a secret. When I'd go to a new school, I wouldn't want the other kids to know about my learning disability, but then I'd be sent off to remedial reading.”

As a kid he used to do ad-lib skits and imitations for his family, enjoying making them laugh, eventually going on to star in his high school production of Guys and Dolls. His mother saw potential in him and encouraged him to never give up. But despite the support of his family, by the time he left high school Cruise felt that he was a 'functional illiterate'. But he followed his mother's advice, later turning to teaching techniques promoted by his Scientology religion and eventually became a successful reader.

A small part in the movie Endless Love, lead to bigger roles in Taps and Risky Business ultimately leading to the 1986 blockbuster Top Gun, which propelled Cruise into the star he is today.

“My childhood was extremely lonely. I was dyslexic and lots of kids make fun of me. That experience made me tough inside, because you learn to quietly accept ridicule.”

“I had to train myself to focus my attention. I became very visual and learned how to create mental images in order to comprehend what I read. ”

"I love what I do. I take great pride in what I do. And I can't do something halfway, three-quarters, nine-tenths. If I'm going to do something, I go all the way"

Back to the top of Tom Cruise