Successful Dyslexics: Whoopi Goldberg
By A. Vaccarino for the Reading Well for Dyslexia 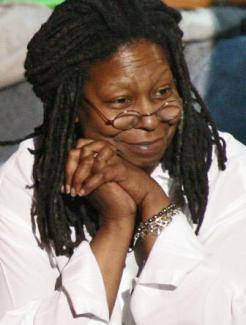 Whoopi Goldberg was born Caryn Elaine Johnson on November 13, 1955 in Chelsea, New York. She was raised primarily by her mother, her father (a clergy man) having left when she was young.

Like many other dyslexics, Whoopi grew up under a number of false labels. She recounts: "When I was a kid they didn't call it dyslexia. They called it... being slow, or you were retarded..." Luckily she and her mother knew that those labels where wrong but she was in fact dealing with a problem that had not yet been defined.

Due to her struggles in school she dropped out at age 17.  Only as an adult did she discover that her learning disabilities were due to dyslexia. With the help of a caring teacher/tutor she developed the skills and confidence to thrive.

An unlikely and eclectic series of jobs as bank teller, bricklayer and a make-up artist in a mortuary preceded formal actress training in New York City.  Later, her breakthrough performance in a one woman Broadway show impressed director Steven Spielberg enough to cast her for the lead in the film The Color Purple, and into stardom.

The once drop out has since gone on to a remarkably long and diverse list of stage work, stand-up comedy, major movies and television roles. She even penned a highly successful children's books series: Sugar Plum Ballerinas. Incredibly, she is one of just 12 people in history to have won all four of entertainment’s major awards: Oscar, Tony, Emmy and Grammy. She was also the first woman to receive the prestigious Mark Twain Prize for American Humor.

Although she had to endure bullying and name calling during her school years, Whoopi credits those who criticized her with giving her the motivation to succeed.  She says that they “went into making me the sum total of what I became, and what I’ve become.”

“I am my own hobby. I'd probably be at home with a couple of books and my cigarettes. Maybe a couple of good movies.”

“I’m dyslexic, so there weren't a whole lot of books in my early life. But I did love stories. I love fairy tales and I love spooky stories. Anything with a good 25 to 30-minute brain trip for me to go on. I still like to be read to.”

"Normal is nothing more than a cycle on a washing machine."

"My family is Jewish, Buddhist, Baptist and Catholic. I don't believe in man-made religions."

Return to the top of Whoopi Goldberg