Who is wearing the rose coloured glasses?

According to one legend, early mapmakers used special lenses while tending to the fine details of their work.  To keep their lenses spotless, some used rose petals to clean dust and debris from the lens' surface. Over time, the trace oils in the petals would stain the lenses a light tint of rose. Seeing the world through rose colored glasses came to mean an attention on detail at the expense of the bigger picture, and later, to see the world in an overly optimistic and romantic way.

I like the legend, though as a person of spectacles, I doubt rose petals ever made for good lens wipes. But rose colored lenses, some say,  just might actually make it easier for a dyslexic to read printed text.

Opinions on glasses for dyslexia are, aptly, polarized. Most professional associations to do with vision have come out against the use of tinted lenses for treating learning disabilities based on a lack of evidence.  Yet the lens makers, many academics and thousands of users of the lenses claim otherwise.

The vocabulary of visual stress

The problem(s) that dyslexia glasses, or any tinted product is actually solving is referred to by many terms, largely used interchangeably. Helen Irlen had originally used the term Scoptic Sensitivity Syndrome, referring to the light within the scotopic range of the visible light spectrum, but later adopted the simpler Irlen Syndrome.

Some older reference can also be found to Meares-Irlen Syndrome, acknowledging the contribution of Olive Meares, a New Zealand teacher who identified the same symptoms as Irlen at approximately the same time. Then there are sporadic references to the cumbersome "arrhythmic saccade and foveation during edge detection iterative arrays" (ASFEDIA)  — a highly specific and technical description of the problem, but it is not commonly used.

Today the most common term used is simply visual stress. According to the Irlen website, the use of this term is "an attempt to simplify and generalize the name with the hopes to garner broader acceptance and understanding of the disorder."

The definition of visual stress / Irlen syndrome provided by Irlen is: A perceptual processing disorder. It is not an optical problem. It is a problem with the brain’s ability to process visual information. This problem tends to run in families and is not currently identified by other standardized educational or medical tests. (Source: Irlen Diagnostic Clinic)

The symptoms of visual stress are many and not universally agreed upon but often include the following: 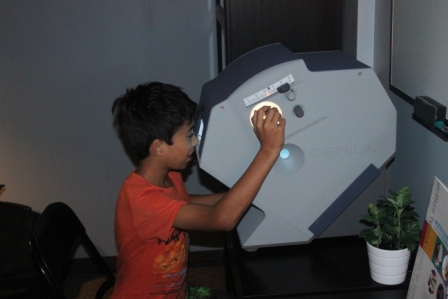 Intuitive Colorimeter:  A device used to find the optimal tint for reducing perceptual distortions from visual stress. The device varies hue, saturation and brightness until the patient arrives at an optimal color.  The color is then incorporated into precision tinted dyslexia glasses. The Colorimeter was invented by Dr. Arnold Wilkins from the University of Essex.

In the section of the statement on controversies they write:

The article cited numerous studies in coming to its conclusion. The joint statement was re-affirmed in July 2014.  You can read the complete joint statement here.  This statement came nine years after a similar 2004 statement from the American Optimetric Association:

This statement directly contradicts a claim made by the Irlen Diagnostic Clinic:

"Scotopic Sensitivity Syndrome is a distinctively different visual problem from visual acuity and refractive errors. Therefore, visual examinations by ophthalmologists and optometrists will not detect this condition. Scotopic Sensitivity Syndrome is different condition from that which is evaluated by a developmental optometrist. Therefore, this condition is not amenable to vision therapy." 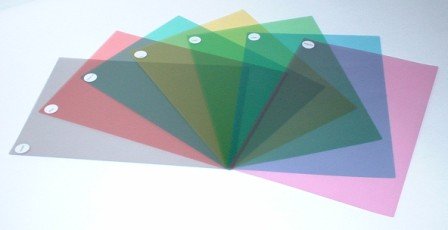 Making sense of it all

As of 2014, the consensus of the optical establishment is clearly against coloured lenses as a viable treatment for learning disabilities, and their judgement warrants consideration if you are considering trying them.

Nonetheless, it is increasingly recognized that there are visual aspects to dyslexia and with over 300 centers (see below) providing coloured lens services, there are obviously a lot of clients who feel they are benefiting.  Even if the benefits were explained by a placebo effect, the benefits would still be real.

We haven't attempted here to weigh all the evidence for and against the use of tinted dyslexia glasses simply because there is far too much and it wouldn't put an end to the debate. Suffice to say that the the use of lenses is not mainstream treatment for dyslexia and has not won over the professional optometric community.

There are two major manufacturers of tinted lenses:

Irlen clinics can be found in 146 locations in the United States and in 46 other countries including Canada and the United Kingdom.

Chromagen clinics can be found in the 190 locations in the United States, four Canadian provinces and in 5 other countries.

In the United Kingdom there is a professional association called the Society for Coloured Lens Providers or S4CLP. They also maintain an international directory of service providers.

Every major North American professional association related to pediatrics and optometry has come out against tinted dyslexia glasses as a treatment for learning disabilities. This is a sobering thought that you should consider.  From a clinical perspective, dyslexia is a neurological, auditory processing problem associated with a weakness in phonemic awareness. When defined this way, there is essentially no way for it to be treatable with tinted products.

But dyslexia does have a visual component and personally, we know of several people who swear by the lenses and any online search can turn up dozens of glowing testimonials and anecdotal evidence supporting the use of glasses. Also, we have been impressed with the rigour and depth of assessment used at our local Opticalm Canada centre where my stepson was assessed.  This doesn't mean that coloured lenses will work for you, but we think it can't hurt to try a coloured overlay and see what happens. There is virtually no risk and little cost in trying. If it makes a big difference for you or your child, then you have little to lose by giving tinted glasses a try.

Back to the top of Dyslexia Glasses