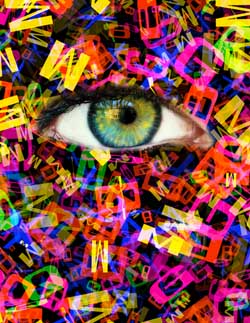 Optical problems often result from simple near or far sightedness. Mental processing problems are often the result of visual stress

Identifying a visual reading problem is difficult because young readers have never seen text differently and therefore cannot report that the text or words look less crisp, or different than they have before, or that they look different from what their friends see. If you've always seen letters moving about on the page, then from your perspective, that's just what letters do.

Here are some general signs you might see in someone who has difficulty with visual comfort or perception:

The signature symptoms of physical problems with the eye include

Instability of text: Characters on the page may appear to move, change shape, flip, shake or slide off the page. View some sample distortions.

Illusions of light and colour: Colour may appear behind the text, in the spaces in between lines or at the edge of the page.

Depth perception difficulties: Difficulty accurately perceiving the depth of words or objects can result in problems with balance, coordination and even motion sickness.

Style and font problems: Small fonts, ornate fonts, and insufficient spacing between letters, words and lines can all impede reading 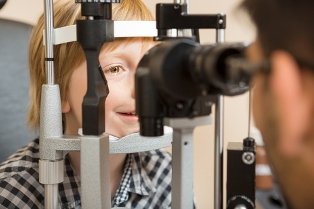 Step one is see your optometrist

You may have heard about something called the Irlen Syndrome. As described by the California based Irlen company, it is a perceptual processing disorder resulting from visual stress that impedes reading but can be treated with coloured lenses.

An oft cited research paper found no benefits from their coloured lenses, but in fact there is a growing body of research indicating that coloured lenses and overlays do help some people with dyslexia.

Irlen is well known in the U.K., Australia and the U.S. but has a much lower profile in Canada.

The three most common physical causes of visual dyslexia are:

Keep in mind that that none of these causes are reading or learning problems in themselves—they are visual problems that contribute to reading problems.

The exact cause of visual processing difficulty in the brain is not known, but may result from over activation of some areas. For more information try the studies below:

The cause of reading problems associated with mental processing is generally believed to be visual stress, sometimes referred to as Irlen Syndrome or Scotopic Sensitivity Syndrome.  Exactly what is causing the stress in brain processing is unknown, but the articles below explore some possibilities. 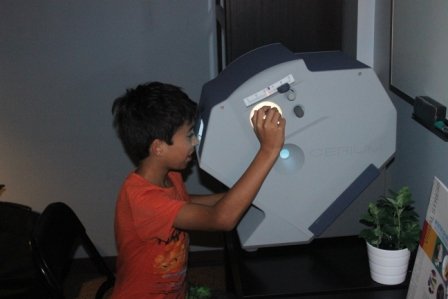 A visit to your optometrist should be among the first things you do when a child is struggling with reading, regardless of what the ultimate cause might be.  At a minimum, the assessment can rule out near and far sightedness. Of course tests of vision are even more important if you suspect that visual stress may be a factor.

The assessment may involve the use of an Intuitive Colorimeter, which helps identify the precise tint that best reduces visual stress for the reader.

Recently my stepson was given an overlay and precision tinted lens assessment at a cutting edge visual stress assessment centre here in Ottawa called Opticalm. This assessment did find some reductions in reading errors with an overlay, but overall did not find that visual stress was a major factor in his dyslexia.

I was impressed with the rigour, depth and technology of the assessment process. Despite the mostly negative finding, it is still enormously helpful to know what is not causing his reading difficulty. Now we can continue to focus on those things that are causing the problem—such as phonemic awareness and site word identification etc. While visual stress is only a small part of the picture for us, for others it can be a major factor. Definitely worth inquiring with your optometrist or a visual stress specialist.

Return to the top of Visual Dyslexia